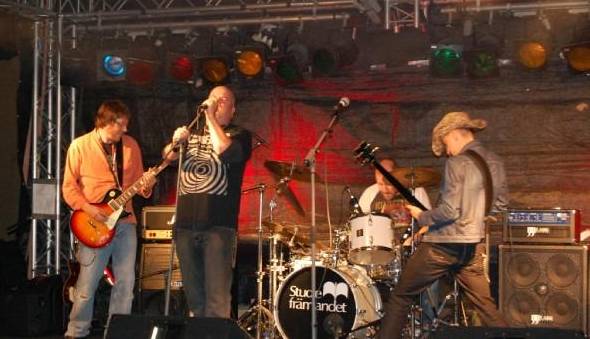 Anders: Guitarist... That's it I guess.

Peter: My id has expired nowadays so I'm a bit lost. Do I exist or do I not? Or am I just
ironic... Oh well, I used to be a gentleman with the ambition of finding the perfect resonance
of a drumhead......so I guess that still stands.

When did you start as a band?

Anders, Peter and Ola (Our former bass player who left the band a couple of months before
the album was released) had previously played in a band for little more than a year and a half.
But that band was mostly filled with arguments and strong stubborn opinions than a healthy
musical atmosphere back then. I don't think that we even did a single gig with that band. And
after we broke up, the three of us decided to continue down a more rock-orientated road.
Everything just fell to place at once when Nicke joined the band and within a year we had
released three demos and played our first gigs.

Oliver(Most recent member) - I was originally intended jump in for a live gig in Lindesberg.
Nicke, whom I had a history together with in thrashmetal outfit Stressfest a few years back
gave me a call one day and asked for the favour. I was working on a solo project at
home(Still am), hadn't been in a band for almost a year and most of all hadn't performed live
in two years(which is quite depressing) I didn't hesitate for second!
The vibes were great, the guys are great and so I asked if I could stay.

What equipment to you use?

Anders: 2 BaCH Lps on gigs(and occationally a Gibson Explorer), a Matamp NEC, a Biyang
Fuzz (but I do change the dirt pedal quite often), a Silver Machine wah + a small selection

Peter: Green sparkle Ludwig drums with a 26" kick, suprasonic snare, DW double pedal and
Paiste 2002 cymbals...and don't forget the cowbell!
"I've got a fever....and the only prescription is more cowbell!"

Nicke: I just sing and dance!

How many demos have you made, and did you get good response of those?

Up until the record we have recorded 4 demos. Well I do think that we have most of the time
received good reviews of our demos. I mean there are some sites that always give us bad
reviews. But that's fine cos� you can't please them all, can you... But most of the time the
words have been positive about our music!

How did you get in contact with Transubstanse records?

Well, let's put it like this: The devil gave us an offer that we couldn't refuse.
Which pretty much means that we sent out some emails and later on a pre-mix of some of
the songs from the record to a few labels and Transubstans gave us an opportunity to come
onboard.

Did they pay for the expenses and in which studio did you record 'stonerized'?

As slaves to the music we stood for the expenses ourselves this time. We didn't know where
or how the record would be released when we went into the studio. But I guess that that's the
way to do it nowadays. First record then find a label. At least for us newcomers haha!

The record is recorded and co-produced by Robban Axelsson at Ljudion here in Stockholm.

what do you think of the 'so called' swedish scene?

Hmm, well yes there are a lot of 70ies/fuzz/groove/heavy rock/stoner bands here in Sweden
in various directions. Just look at the releases this year. We got new albums from
Truckfighters, Deville, Mangrove, Abramis Brahma among others. Blowback and Asteriod are
coming with new records soon. Numbah Ten have new material recorded etc. Plus that there
are a lot of new bands turning up here and there.

Can hardly call it a scene but we are aware of each other which is a good thing. Most of the
bigger ones are constantly touring outside Sweden since it's hard to get good gigs here. And
the rest of us are struggling the best we can. Trying to trade shows, helping out with gig
contacts and so on.

It's not like there are hordes of people showing up at shows or buying records hehe.
That's one way to look at it...

Since Oliver just recently joined the band we haven't been able to book any gigs. But we're
working on it again which feels great. We played our first gig together at a punkfestival earlier
on last month and there will be a few more this fall. It's not like we are an all the time-touring
band because of our families but we're trying to gig on, for us, a regular basis(which means at
least once a month lol).

A little birdie whispered in my ears that you�re gonna do some gigs with numbah ten and the goddamned,can you tell us something about those plans?

Ever since Numbah Ten and Ponamero Sundown played with Grand Magus in Stockholm in
2008 there has been some talk to do something together again. And it so happened that they
knew The Goddamned, whom we played with at a biker party a couple of years ago. Well
we're thinking of doing some shows together as a package. A night filled with fuzz, 70ies hard
rock and psychedelica. I mean it can't get much better than that.

Well yes. We did a short tour last fall and played some shows in Germany and Belgium. And
we have also been in Denmark and in the UK. No massive touring but a show here and there!

what influences do you have, and what kind of music did you grew up with?

Oliver: Some diverse bands that shaped my youth(for the better): Rush, The Cult,
Coroner...Skinny Puppy!
Anders: I always tend to come back to these four for some reason: Iron Maiden, Ramones,
Bruce Springsteen and Black Sabbath.
Peter: I've got a lot of influences.....I listen to everything that I consider good with a fondness
for hardrock. I grew up listening to the old dinosaurs of rock.....and will never stop either. The
great thing nowadays is that it's much easier to find lost treasures from the golden 70ies (and
other)...there's so much! And on vinyl!!!

I've also always been fond of the harder school of rock. My double kick is pretty much a result
of that. Nothing beats a double bass roll...
Nicke: Punk and HC

any hobbies besides the music?

Oliver: "Beer snob[Bier;'n'b]", meaning I ruin myself every now and then buying rare beer
imports from around the globe. Some for direct consumption, others for safe storage in a dark
cellar for future treats and hangovers.
Anders: No, not really. I'm not totally sure if that's a good thing though...
Peter: Well...I guess that would be movies & football...though not together. Football-movies
usually sucks.
Nicke: Drinkin' Oliver's rare beer collection.

do you all have families and jobs, or are you slackers who drink beer all day long and beat the shit out of your neighbours?

Oliver: IT Consultant by day, bass player by night. I enjoy a few beers now and then(refer to
question 12), knock on any neighbours' door and offer them into beating the shit out of me,
singing Christmas carols off key.
Anders: Well I'm as far from a slacker as you can get. I got three kids and working my ass of
as a teacher in Pre-School.
Peter: Slave to the code...rider of the magic keyboard....inventor of superior things...
Nicke: Work work work and two teenage daughters which means more work

what do you think of sweden in general, good or bad?, or is it a disaster?

Geographically, it's very long country, larger than anyone probably believes, and contrary to
what anyone thinks...We do nurture our young under the snow the first 3 months. It's a nice
place.

Well, we are starting to make plans for our next release. It's still a bit early but it wouldn't be a
surprise if we started the recordings sometime next summer. We have just begun to write
new material but we're usually a fast working band when it comes to that.
There are also some plans for some shows in Europe as well. But we're not totally sure
when...But sooner or later...And as always we're looking for gigs here in Sweden. It seems
that we're heading down to Gothenburg this fall which would be a blast if everything goes our
way.

Thanks alot for letting me harass you!... by the way, keep track of your computer next time you're out traveling;-)

Slick move...are you implying You're the one who stole it at the luggage claim last week at
Arlanda airport?!