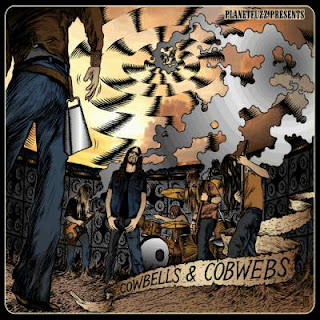 Planetfuzz had a dream spanning many years to produce a KICK ASS compilation with many new upcoming bands and source enough previously unreleased material to warrant a good find! This our first release will allow us to branch off and continue spreading the good vibe of good bands and allow us to put out splits, EP’s and LP’s! With so many great Labels & Zines on offer, we hope to be able to contribute to the flow of great bands being released and hopefully given our passion for Fuzz will be Successful! Cowbells & Cobwebs is sure to explore the mind, the senses and the unknown!  Now available!
Year: 2010
Number of discs: 2
Number of tracks: 28
Available on: CD
Running Time
Disc 1:  79:37
Disc 2:  79:48 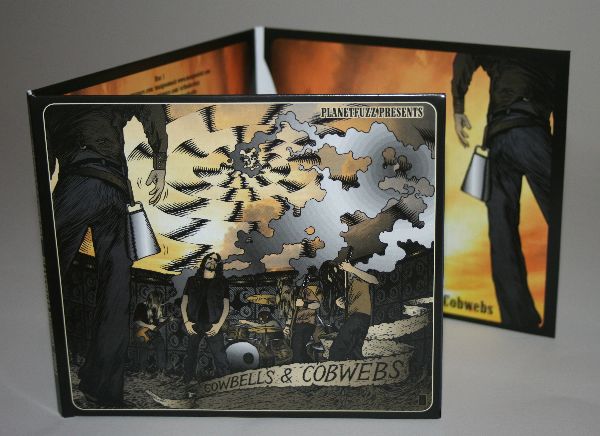 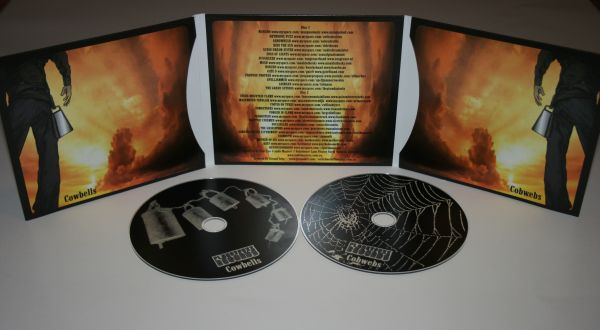 The Obelisk
As a general rule, I try to avoid reviewing compilations, because either the review winds up being a list of the bands involved with nothing of substance said about any of them, or it’s promo-speak pushing an album by saying, “It’s good, you should buy it.” Finally approaching the Planetfuzz Records debut release, Cowbells and Cobwebs, which culls together a whopping 28 underground purveyors of heavy and fuzzed out rock over the course of two 14-track discs, the best I’m hoping for is a combination of both the above. Needless to say, I’ve been sitting on the review for a while, and for me to go track by track and analyze each song would (1) take too long and (2) make for a review of such length that no one would ever read it, being of no use to any of the parties involved – bands, label, reader or myself. To give away the conclusion early: It’s a quality collection with a bunch of previously unheard material that those who think they can hold their breath for nearly 160 minutes (each disc is 79-plus) of fuzz without drowning in it would do well to check out.

A few familiar names pop up on the first disc, appropriately labeled Cowbells. Bands like Orthodox Fuzz, Arrowhead, Ride the Sun, Honcho, Gate 9, Sungrazer and The Grand Astoria are situated next to newcomers Mangoo (who might win the award for best band moniker on the comp), Loimann, Sons of Giants, Propane Propane, Audio Dream Sister, Moab and Spelljammer, and the highlights are just about evenly split between bands I knew going into Cowbells and Cobwebs and bands I didn’t. Sungrazer’s jammy “Zero Zero” shows there’s ample reasoning behind their having been signed to Elektrohasch, and I didn’t think much of it for its opening, but Propane Propane’s “It’s Alright” wound up one of the high points of the collection for its drum sound alone. Norwegian rockers Honcho check in with a track called  “Earth” from their 2010 self-released Battle of Wits album and the song is positively gorgeous in that post-Soundgarden Euro-stoner kind of way, while just a few tracks earlier, Ride the Sun show why their name has been ringing out so far over the last year or so with the previously-unreleased “Ride.”

Ride the Sun is just one of many bands showing off new or previously-unreleased material. On Cowbells, Gate 9, Orthodox Fuzz, Mangoo, Moab and The Grand Astoria also show off exclusive wares, and on Cobwebs, Floodstain, Forged in Flame, Electric Cavemen, Soulseller, Samsara Blues Experiment, The Graviators, and El’ Garsonorogio do likewise, the latter with a 13:36 extended closing cut that makes use of several different atmospheres. There are fewer immediately recognizable bands on Cobwebs, but more diversity of sound too. The disc opens with Inner Mountain Flame, who have some of Cowbells and Cobwebs’ only screamed vocals, and Maaswater Veenlijk, Coffin on Tyres, Tombstones, Keef, Cigmouth and Mother of Six all contribute varied styles within the stoner/doom subset. The Fu Manchu-worship Cigmouth get up to on “Damn Critters!” is so blatant it just has to be love, and I’d heard a lot about Keef since they released the well-received Stoned to Doom on PsycheDOOMelic last year, but never actually listened to the band. Their Goatsnake-ery was well done enough to make me want to hear that record, so if the point of Cowbells and Cobwebs was to get people to check out new bands while also announcing Planetfuzz Records’ arrival on the scene, then mission accomplished.


Cowbells flows better track to track than does Cobwebs, but that’s only because the bands have more in common sonically (and probably because I knew more of them going into this review). As I’m someone who usually doesn’t buy compilations until seven years later when they’re out of print and hard to find, take to heart my recommendation to check out Cowbells and Cobwebs and consider it a matter of saving yourself the trouble down the road. Five years from now, when acts like Ride the Sun, Sungrazer, Samsara Blues Experiment and Tombstones are helping to redefine modern stoner and fuzz-heavy rock, you’ll be glad to have these tracks on hand. I know I will, anyway. Also worthy of note is the artwork of Australian designer Glenn “Glenno” Smith and the compact digi-packaging the compilation comes in. It’s a professional collection, and obviously a lot of thought and planning went into it (the thought of wrangling 28 stoner bands for a joint release sounds like a nightmare to me), and a classic way to meet the acts who are the future of the style. Not every song is a gem, but more than enough are to justify investigation, which as far as I’m concerned, is recommended.

To be honest, only a handful of stoner/heavy rock compilations are particularly worth releasing. Up until now, there are only a few that have been put together with a wealth of ideas, especially those who include a lot of unknown bands and/or unknown songs from well-known bands. Compilations that come to my mind are 'Welcome To MeteorCity', 'Doom Capital', 'Judge Not...' or 'Sucking The 70's Vol.I & II', just to give a few examples. That is the way to do it! 'Cowbells & Cobwebs' offers the same level of quality, like the ones which I mentioned before. At the same time, it's also the first Planetfuzz Records release and perhaps you have noticed this name before, because these are the same guys who are running the PlanetFuzz webzine. It is good to see that there is still a vital community in Australia and I hope that their record label will continue to grow. But whatever happens, 'Cowbells & Cobwebs' is a pretty impressive start because it features 28 mostly unknown heavy rock bands from all over the world with a total of 28 tracks; most of them are previously unreleased. I was pleasantly surprised by the quality of these discs, and actually quite blown away by a couple of songs in particular! Here, everything is about big fat riffs, heavy grooves, and insanely fuzzed-out guitars and bass.
Texas' ORTHODOX FUZZ lay down a fat southern rock groove with plenty of blues and metal while ARROWHEAD please my ears with 'Eagle Death Machine', a killer track with super heavy riffs reminiscent of Sir Lord Baltimore or Mountain. For heaven's sake, I need to hear more from this Australian band! Austria's SONS OF GIANTS also conjure the ghosts of the 1970's, but the Kyuss influence can still be felt strongly. Both have been successfully melted together, so that 'Mr. Woo' is the next highlight for me. MOAB represent with 'Morelore' the doomier end of the heavy rock/metal spectrum and offer great potential. It seems that these Californian guys are a sucker for Yob. Norway's HONCHO is the next positive surprise and I clearly remember when I wrote a review about their debut album 'Corporate Rock', released by Water Dragon Records in 2002. Back then I was not convinced by their standardized heavy fuzz rock. It, is therefore, all the more pleasing that their track 'Earth' is very different from the tunes on the album. Apparently, they have discovered their old Black Sabbath records, because 'Earth' is their doomiest and heaviest tune so far. Well done!
Another outstanding Scandinavian band on 'Cowbells & Cobwebs' is TOMBSTONES, who deliver a mighty blues-driven mid-tempo rocker. Here, too, 1970's heavy rock and metal have been closely intertwined and the result is superb. Netherland's FLOODSTAIN walk in Sixty Watt Shaman's footsteps and manage to set their own marks with 'Slumbering Titan Slayer'. This powerful tracks shows once more that the compilation offers an excellent opportunity for the listener to discover some truly impressive unknown heavy bands. Well ok, I could go and on because the number of killer tracks is simply breathtaking. PROPANE PROPANE from Sweden also belong to this category. 'It's Alright' combines Brant Bjork's coolness with Blue Cheer's mind-blowing heaviness and I can only hope that this band will release their first album as soon as possible. Ok, enough for today or this review will never end. In fact, 'Cowbells & Cobwebs' is a pulverizing killer compilation and if I had to buy it, I would do it immediately. Also worth mentioning is the demanding packaging that is just as tasteful as the included bands. So, if you're a fan of heavy fuzzrock in all facets then this should be on your upcoming shopping list.
(KK)