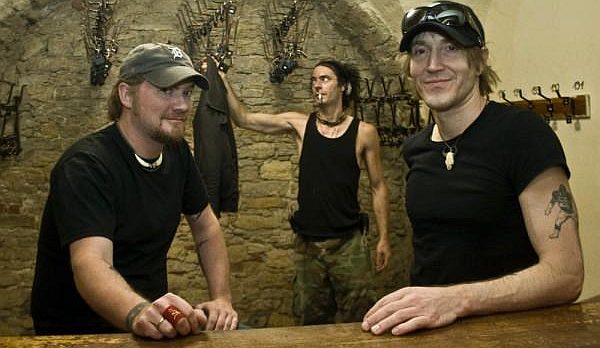 What's it like to be back together and on the road after 8 years?

Rob: It's cool, nothing has really changed, except we have removed a couple of chemicals, and it makes a lot more sense without those chemicals

Rob: Mainly because of us mixing chemicals together, and some didn't mix well and shit blew up. I didn't realize until a year after that we broke up, honestly (laughs) and that's true.

Are all 3 of you living in the same city now?

Rob: We don't know..Since we got back together it's doesn't seem like anybody is living anywhere, we're on the road, it's difficult to explain. We live in different cities i guess.

You must be working on a new album, I think I've heard 3 new songs there! Is it gonna be similar to the previous albums?

Rob: Yeah! Well that's a weird question cause I don't think anything has changed with us 3 musically, you know, we all like what we like. It's gonna be Karma to Burn.
We've been fucking around with the recording and it's been going really cool, it sounds the way we want it to sound!

When do you guys plan to release the new album and when are you going into the studio?

Rob:Oh my god, sometime in 2010, probably around april, april-isch..We were in the studio right before we came out here.

What about other bands you guys have been playing in the last couple of years, might that give problems for Karma To Burn?

Rob: No. We don't really think about it too much I guess, we just play and everything works out the way its supposed to work out. We try not to think too much about the future 'cause there's enough shit to do right now. Playing with other bands was a learning experience, you know, I haven't killed anybody. And this what we're doing is really effortless, it's real easy to do.

I heard something about Will doing a project with The Sons Of The Alpha Centauri, what can you tell about that?

Rob: Yea he recorded with them! I think it was 1 or 2 years ago. He went over to the UK and did some recordings, like a collaboration, they wrote some songs together. Back in june-july of this year we played with them.

When was the last time you were in Europe?

Rob:  We were here in June-July, so I'm really happy to be back. We played at Duna Jam, that was amazing! It was like nothing I've ever experienced, it was in the middle of nowhere , beautiful, 150 people there, all there to see the music. It was like a vacation. It was kinda bizarre 'cause that's how we started the tour. Probably one of the coolest places I've ever been, we played on the beach which was great!
Stoned from the Underground was really cool too, nothing like Duna Jam, it's not a festival, it's basically like a houseparty in the middle of nowhere, it's really low key, hard to describe.

Any news about the next European tour?

Rob:  Yea, I love Europe, we plan on coming back around April 2010. I always have a better time in Europe (laughs)

Any final thoughts for the readers of Planetfuzz?