First of all I would like to thanks these guys and all the bands that have sent me their recordings over the last few months, I always knew that there was tons of talent out there just waiting to be discovered. Being part of this website has made me realize this even more so. I seem to be on a roll here with bands from France... Coffin On Tyres, Mudweiser, Alcohsonic... and now I have here the EP from Jumping Jack.

I'm not sure what the reasoning was in naming the band "Jumping Jack", to me it seems kind of fruity but I'm sure this 3-piece band from Nantes, France has their reasons. The music from their first release is anything but fruity however. On any given day this EP could bench-press that fat guy from Lost, while smoking a cigarette and getting a tattoo.

With an EP called "Cows and Whisky" you don't have to be a rocket scientist to figure out what these guys are about. Seems there are rednecks all over the globe that enjoy a stiff drink, a nice herbal blend and some kick-ass metal, and I salute every one of you! Jumping Jack is just this, some redneck metal heads that love their Pantera as much as they love their Kyuss, Motorhead, Black Sabbath and Alice in Chains.

Julian's vocals have that throaty rasp I can never get tired of, and he backs it up with some seriously tasty riffs. Chris and Manu know their place in the band and hold down the fort with a heavy back end. If they are as tight live as they seem to be on plastic, I'm willing to bet we'll be hearing a lot more from these guys.

"Cows and Whisky" is the perfect soundtrack for a night of heavy drinking and cow tipping.... Jumping Jack is a gas gas gas!!... 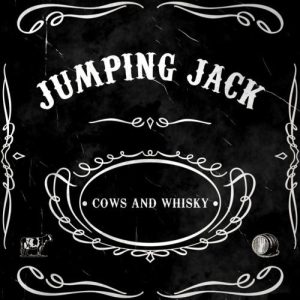