StonerRocK from the USA
Wo Fat - Analog Man
Back from the swamp these "Rednecks" will stomp all over your face!
Like predators out hunting, Wo Fat spins right thru your body like some kind of Murder weapon.

It's been almost two years since Wo Fat from Dallas, USA started harassing the big
Record industry and with the debut "The Gathering Dark" made them a name in the scene. On the second release "Psychedelonaut" these Kentucky fried chicken eating trio take us on a speed boat trip on the Mississippi and just like the debut it kicks major ass!

Oh man, what can i say... these guys are animals, Ten Tons of raw power, truckloads of fuzzadelic godness and southern fried ass kicking with great vocals. The first track "Psychedelonaut"
is more like a tribute to the 70's, very cool riffs, lots of old hard rock feeling and of course tonnage of heavy fuzz. The second track "Enter The Riffian"is an unstoppable heavy boogie attack, cool riffs here also and the chorus is great, one of my favourites on this album. Track five "Two The Hard Way" sniffing 70's ass again and reveal Wo Fat's influences once again,
Dignities such as Black Sabbath, Budgie, ZZ Top, Kyuss, Nebula, Orange Goblin and Leaf Hounds must have been important for the forming of this band.

The finishing track "The Spheres Beyond" is like a battering ram to crush everything in it's way, i love this song and it reminds me of an heavier Datura.This instrumental track watches just under 13 minutes and contains hammond, played by Kent Stump (guitar,vox) and also recorded and mixed the album. There's Lots of psychedelic soundscapes and a heavy bass line , a kinda go-with-the-flow song that grabbs you by the balls.

"Psychedelonaut" is a burn out from start to finish line and the art work is superb, designed by some Jessica M. Beethe in four colour, psychedelic and very 70's inspired. If you decide to go with this psychedelonaut you made a good choice.

Look out!... or you might get steamrolled by this hell fueled mean machine! 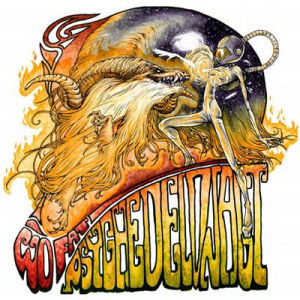 Track List
01 Psychedelonaut
02 Enter The Riffian
03 Analog Man
04 El Culto De La Avaricia
05 Two The Hard Way
06 The Slow Blade
07 Shake'em On Down
08 Pot Of This Earth
09 The Spherse Beyond
Posted by A.C.Cruiser