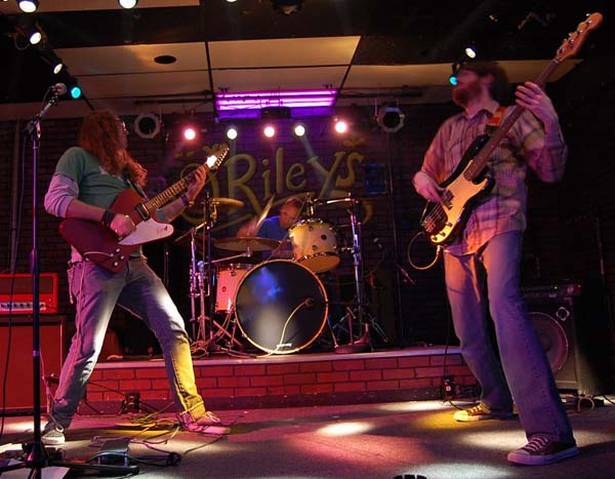 We are tres hombres from Texas that are just trying to play music that we dig.
We've been playing together as a band since around 2002 or 2003 I think. We all have widely varied musical interests that we bring to the table, which is great for us as a band. Michael, our drummer, and I have been good friends and played in a number of bands together of varying styles, from experimental funk and jazz to more metal leanings, for around 20 years. Prior to Wo Fat, Tim played in an improvisational noise band. The 3 of us are great friends and our rehearsals are as much about hanging out as they are about rehearsing, which makes for a good band vibe.

What you hellbillies do for a living?

By day, I am a recording engineer at a major studio in Dallas called Crystal Clear Sound. I work on all kinds of different projects all of the time. I actually recorded and mixed the first Blood of the Sun record here. Tim also works for the same studio and Michael is a high school teacher.

Are all three of you living in the same city?

We do all live in Dallas. We actually all live within 5 minutes of each other in East Dallas which is a cool older part of town.

How's the scene in your area?

The scene in Dallas is really weird. Dallas in general is a very appearance driven/conscious city and because of that vibe, a lot of people seem to be afraid to make up their own minds about what they dig. People don't go out and support live original music here. Austin is a completely different vibe. There, it's about individuality and supporting creativity. Dallas isn't like that. Here, cover and tribute bands are king.
That being said, there are some cool bands around and some cool things happening.
We played at the second annual Dallas Doom Daze festival in May, which is organized by Justin Delord, who works really hard to get a Doom scene happening here in Dallas. Justin's got a killer band called Kin of Ettins and there are some other great bands here in Dallas/Fort Worth like Blood of the Sun, Orthodox Fuzz, Four Days to Burn, Dragna, Little Big Horn, and more that I'm sure I'm forgetting at the moment.

Do you get good response at your gigs?

Yes, we do get a good response at our gigs.

Toured alot in the us?

Because all three of us have day gigs, it really limits our ability to tour. We're a little older too, so we don't want to give up our regular jobs for the poverty and uncertainty that comes with trying to make a go of it on the road. We are trying to get our music out there through other avenues, like the internet. We do hope to set up a European tour sometime though.

Are you pleased with your latest release?

We are very happy with "Psychedelonaut". We feel like it is a step up from the first album, "The Gathering Dark," in many ways. We have grown and come together more as a band. I also wanted to achieve a more "live" feel to the record and get a bit more psychedelic at times, which I feel like we did. We recorded on 2" analog tape and mixed analog using console automation, so we really dig the sonic character too.

How many copies has Psychedelonaut sold so far?

I'm not actually sure. There are a lot of cd's in the hands of various stores, but sales have been pretty good. I'm thinking we will probably have to do a second pressing before the end of the year.

Did you get good response on your debut?

We got a good response but we didn't get the same amount of exposure that we have gotten for the new album. Since we released "Psychedeloanut," sales of the first album have picked up quite a bit. Brainticket Records and John Perez are helping us to get that wider exposure.

We have a few goals that we're shooting for. One being a small European tour. Another goal is to release both albums on vinyl.

Any new recordings on the way?

We are currently working on new songs for the next album. The new stuff is coming together really well and hope to maybe get in the studio this fall to lay down the tracks.

Have you ever been in europe or any other part of the world?

We have not been to Europe as band, no. Like I said, we would love to go someday.

Do you all have families, or are you bachelors?

Michael and I are both married. Michael has 4 kids. This also restricts our touring capabilities. Tim is still single though.

What hobbies do you have besides the music?

That's tough to answer. For me, music is such a pervasive thing my life that music is my main hobby. Besides that, my wife and I dig watching movies: sci fi, classic horror, kung fu, classic movies in general... And we hang out with our 3 awesome dogs who are a handful. We have 2 border collies and a Rhodesian Ridgeback/beagle mix.

Thanks alot and i hope we all se you in future!