INTERVIEW: The Curtains Of Night 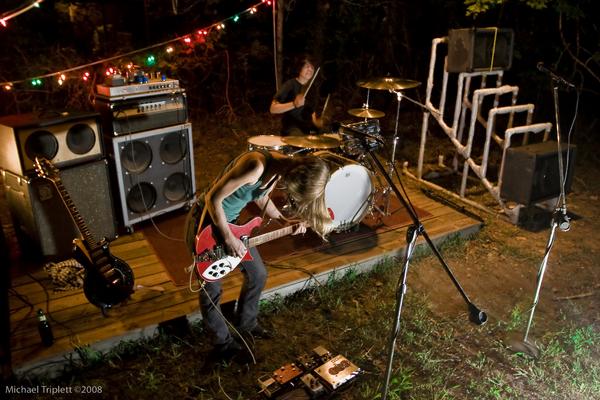 Matt - Hi and welcome to PLANETFUZZ, can we start with giving a brief description on how you guys met and what's been happening to date?

Nora- We met in 2006 when Lauren moved here (North Carolina) from Chicago. We had lots of mutual friends and I asked her if she would teach drums at a Rock and Roll Camp for Girls that I had worked at for a couple summers. Amidst the casually tuned guitars and awesome tear-inducing songs about jewel thieves and lions; we realized we had a musical connection. We started playing together in the fall of 2006 and recorded our first record in Feb 2008.

Matt - The Curtains of Night, I know very little about! Not a great deal of info has surfaced about you guys. Where was Lost Houses recorded and who did the mixing on this record?

Nora- We recorded and mixed with our friend Nick Petersen. He ran a studio/ practice space called Track and Field in Carrboro, NC which had to close a week after we recorded because the rent got out of control. Nick organized a huge 2 day blow out party with local bands who recorded or practiced there and another guy made a documentary DVD of the weekend called "The Stars of Track and Field."

Matt - Lost Houses production is incredible was it a long process laying down these tracks? And was it a costly one?

Nora-Thanks! We actually recorded all the music in a week-end and I did the vocals later in Nick's hallway.

Matt - Could you tell us a little bit about the label that picked you guys up (Holidays for Quince Records)?

Nora - Sure, HFQ is run by Heather McEntire and Jenks Miller. They are both musicians in a bunch of great bands (Bellafea, In the Year of the Pig, Mt Moriah, Horseback) and started the label to put out their own bands and other local bands that moved them regardless of genre.

Matt - What is The Curtain's song writing process? Is it a collective job being a Duo?

Nora-I usually come up with a few loose ideas for some riffs and we will jam on them for a while and see where they end up. Sometimes I hear a riff in a very specific way and don't want it to change and other times I write off of Lauren's drumming. Then we'll start arranging the song structure and I'll start writing lyrics which may move the structure around a little more. Being a duo really makes the process easier, it still may take us months to write a song though. There is definitely more pressure for each part to really hold it's own in a duo; it's not like in a bigger band where you can take a nap while someone else is soloing.

Matt - For a Duo the sound is massive and full, did you get people in to help fill the sound or is it just you two girls playing throughout the record?

Nora- Nope, the record is just us. I did double up my guitar tracks though.


Matt - What Equipment do you girls use?

Nora- Lauren plays a 70's Ludwig kit. I play through two heads, an Ampeg v-4 and one I built based off a Marshall plexi, and go into an Ampeg cab and two other cabs I built. I play a Rickenbacker 620 and a Gibson s-1.

Matt - What are your main influences and how would you best describe The Curtains of Night's sound?

Nora- For some reason this is always the hardest question�.We both grew up in the early 90s listening to bands like Karp, Godheadsilo, the Melvins, so I think that heavy energy is there and I know Lauren is influenced by Todd Trainer from Shellac's drumming. Musically I'm much more inspired by more psych and blues-driven riffs; Black Sabbath, the Flower Travelin' Band, Dead Meadow and droney country blues like Fred McDowell, Junior Kimbrough, and Roscoe Holcomb.

Matt - I guess you be pretty busy promoting record at this stage, what's the plan for tours etc?

Nora- We leave for an east coast/Midwest tour of the US today!

Matt - How would you describe a Curtain's Live Show?

Matt - Is The Curtains of Night your only band or are, you girls in other side projects?

Nora- This is the only band either of us is in now.

Matt - Is music your lives or you guys work? If so what you guys do for work?

Nora- Ha! I wish it was our lives, right now it feels like a really expensive hobby. Lauren works as a pre-school teacher and I have increasingly less frequent work making props and puppets for stop-motion animation commercials.

Matt- How do you see the current music scene? Do you guys catch many new bands coming up the ranks?

Nora-It's honestly a little over whelming, there are so many goddamn bands now! I think I've switched my focus to more local bands as a way of wrapping my head around all the music. We play and go out to shows a lot, so we do see a bunch of new bands.

Matt - Who would you recommend checking out that you have heard lately?

Nora- Another band on our label, Caltrop is amazing and should be much more widely recognized, and a band from Virginia, Pontiak has blown my mind the last couple times I�ve seen them.

Matt - What's playing in The Curtains of Night's stereo at the moment?

Nora-I've been listening to the new Mastodon record, "Crack the Skye" a ton; the production is awfully slick, but the songs really reach a new level. Pontiak's "Maker" is a really cool, stream of conscious heavy groove. Arboretum "Rites of Uncovering" is a nice soundtrack for resting on the couch with a beer after work. There is a song on Buddy Guy's "Sweet Tea" which is just about the nastiest, heaviest song I've ever heard.

Nora- A few weeks ago we played a show at our indoor/outdoor practice space with our friends' (and my boyfriend's) band, Death Came Down the Mountain and this amazing two-piece, Dark Castle from Florida. It was cool playing a place where strangers could just walk up and check things out, and all your friends were there drinking from a keg. A good, friendly metal show.

Matt - What was the worst?

Nora- Cleveland, where some Asshat booked us opening up for some lo-fi pop bands and the audience coved their ears stared at us like we needed to be committed.

Matt - Given chance to jam with anyone dead or alive to form a supergroup who would that consist of?

Nora- I'd really like to be in a band where Lemmy and P.J Harvey sing duets.

Matt - What's the plan for the future?

Nora- We are about to go on tour, then we'll take some time off to write some more and hopefully record another album in the fall or winter.

Matt - Thanks so much for taking time to do this interview! Lost Houses is a rad record and I hope you girls kick as much ass and get what you deserve with this killer release! All the best for the future \m/
Myspace
Posted by A.C.Cruiser