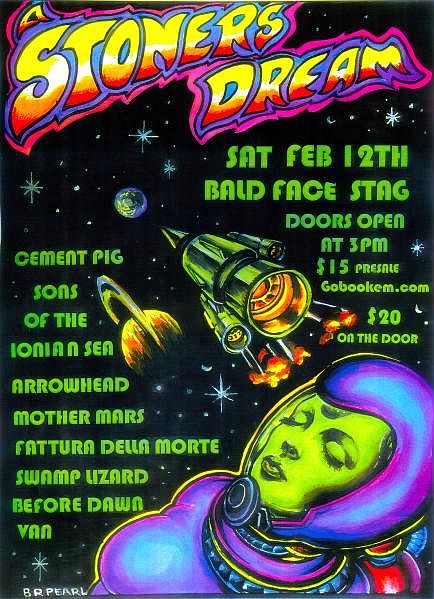 ARROWHEAD will place you in the 90's Grunge / Stoner era with the band being likened to the Australian answer to Kyuss.The masculine vocal and hard drumming styles of the band will have you begging for smoke as you drift away into the pure psychedelic state of your souls from such warm tones and rollin bluesy sabbathesqe riff's, smotherd in a wall of orange fuzz.

MOTHER MARS the three piece power house jam band will offer psychedelic stoner blues with the occasional detour through the valley of doooooooom, zero gravity ear melting space rock that will have you exit and re-enter the atmosphere as we know it in real time.

SUMMONUS are four musicians from disparate musical backgrounds who hail from Sydney, Melbourne and Glasgow and have found common ground in their shared penchant for sludge, doom metal, stoner rock and death metal. Earlier in 2010, Summonus were handpicked by Mastodon to open their Sydney show; the review of their set by Voltage Media said of the band, Slow dirty doom sludge metal boasting absolute destruction of the senses.

VAN create the type of music that would make for the perfect soundtrack for a long drive along the Australian coastline, on a hot summer day, in a V8 powered Holden Sandman panel van. The echoes of Fu Manchu, Nebula and Karma To Burn can be heard in the hypnotic instrumental jams they crank out.

SWAMP LIZARD being one of australia's finest grunge bands ruthlessly fronted by a female mashes together what sounds like Mudhoney meets Acid King. They will be opening the festival so get there early.

BEFORE DAWN are the ADD-afflicted, Ritalin-addicted, sludgy, doom-punk bastard child of a woolly mammoth and ya mums love for overproof moonshine. A deathly mix of a sordid love for the prehistoric and the predatory; a hyper tense, super focused live set that leaves you wet, broke and confused. Featuring members of Sydney bands The Riot & the Trauma and Attica, these are the boys who will be keeping you up all night and you know it's gonna be a long night, a night that's at its most heavy, just BEFORE DAWN.
Posted by A.C.Cruiser