Rock'n Roll from Sweden
Burn - Try to Get Home

Back in the days when dignities like MC5, Thin Lizzy, Kiss and Johnny Thunders held court there were three kids who secretly drank diesel, shitted bricks and dreamed of becoming rock stars. These kids grew up and became BURN...
These rock fanatics known as Burn, hailing from Gothenburg, Sweden is a menace to society. This ain’t stoner and not that heavy but its rock’n rooooooooooooooooooooooll ladies and gentlemen, with some punk rock thrown in, and I just love it. As the title says; these kids are A REAL ROCK’N ROLL BAND! You get pure rock and fucking roll without any pompous arrangements and other shit, just plain and simple. These rockers “share the same cake” as The Hellacopters, early Kiss, Thin Lizzy, New York Dolls and MC5, and I bet the whole city of GBG shivers when this power trio takes the stage.
The first act ‘Try to get home’ is a burnout that literally drool of the 70’s delight, catchy riffs with good clean vocals and a whole lotta fun which makes you wanna go berserk through your living room with a beer in hand and there after puke yourself to death! Next track ‘Addict’ sounds pretty much the same, except for the I have-won-a-the-Hellacopters-look-a-like-contest sounding riffs with a piano in the background and everything. It’s not bad at all for being a clone and I’m quite impressed, but I think Burn should stick to their “own” sound instead of sniffing someone else’s ass.
The third upstart, ‘Burn charge recover’ is one of the outstanding tracks on ‘A Real Rock’n Roll Band’, this nugget runs through your head like a rampant horde of Mongolian monks on steroids! You get lots of good old rock’n roll stomping with lots of joy and Burn never seems to get tired in creating great music for great people. Their instruments just goes on and on like some prehistoric perpetual machine.
This trio have to be the long lost love Childs of Mr. Hellacopters and Mrs. Johnny Thunders because this is exactly how it sounds, a mix between old and new that has been Shaped into Burn. There is a refreshing ray of light that stretches through each song which makes the music feel more alive and kicking, and as I said before...this smoooooooookes! ‘A Real Rock'n Roll Band’ contains six beautifully composed gems, recorded in the same studio (evil grill) as one of my old bands which brings back some memoriesJ I’m a bit late with the review (I’m sorry) and during that time Burn have managed to put out their debut album ‘Rock Royale’ due for release on 27th of December that can be pre-ordered here at Bengans Music
Burn is a ‘retrocution’ that touches everything from the 70’s rock/hard rock era, and could easily have been one of the cool guys back in the days who was defending the rock throne against disco queers like the Bee Gee’s and ABBA. If you’re into “prehistoric” rock music together with some newer bands like The Hellacopters, Bad Wizard, Blood Of The Sun and so on you will go crazy when Burn hits the speakers. From now on my motto will be: BURN BABY BURN!
Reviewed by Tobias Beament
Myspace
Deezer
iTunes
HMV
Bengans Music 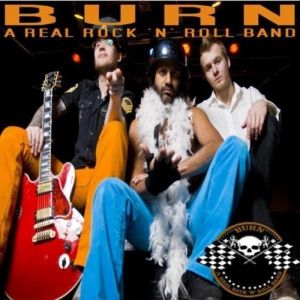