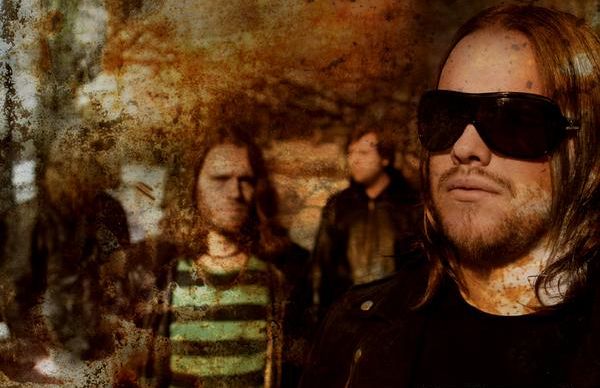 Matt - G'day guys, can we start with giving a brief description on how you guys met and what's been happening to date?

Hi Matt! -Martin & Johan grew up together and have known each-other forever and sometimes even get mistaken for brothers. We all come from the same place in the south (woods) of Sweden so we've known each other for quite some time. Martin and Niklas started to collaborate and recorded some songs between 2007 and 2009. Things were moving along pretty slowly when suddenly Transubstans Records contacted us after hearing a demo of the song Back to the sabbath and offered us a record deal. We became a four piece in early 2009, recorded the album in july and in august the video for Back to the Sabbath was shot. Tomas Tjader did a wonderful job on that one. Check it out on youtube!

Matt - the Record has fantastic production, where did you record it,how long did it take to record and was it costly?

We recorded in a studio called Sound Palace which is basically located in our backyard. Not literally, but it's located in the middle of the woods where we grew up. That's a big part of why we chose that particular studio, because it felt like home. Also the guys who ran it had a good reputation and we were familiar with their work. All in all we were there for about two weeks and it cost us dearly! (laughter)

Matt - Can you tell us about the label you are on Transubstans Records?

Transubstans is a label that has a great love for 70's rock and Doom Metal. They are based in the south of Sweden (Skane). We reminded them of Pentagram and that's basically how we wound up on their roster. We are obviously very flattered by this comparison and we couldn't be happier with them!

Matt - What is The Graviators song writing process?

The song writing process is usually Martin and Niklas getting together and magic happens! Both provide riffs and work out vocal melodies. Lyrics are divided up between Martin, Johan & Niklas. We could get into a whole page of who wrote what but if you buy the album it's all credited in the booklet. We all agree that the drummer does nothing! Ha Ha!

Matt - You guys have a massive yet vintage sound, what equipment do you guys use?

Matt - I guess it's easy to pigeon hole bands and put them in genres, but what are your main influences and how would you describe your brand of rock?

We have alot of influences. Everything from Pentagram and Black Sabbath to Italian movie music, to great new bands like Swedens finest and label mates, Graveyard. We don't like to be tagged as a stoner band. There's more to our music than that. Call it heavy 70's influenced groovy rock or whatever. It's up to the listener to decide what to call us. Hopefully they think it's groovy, heavy and cool. We'll settle for that!

Matt - I guess you be pretty busy promoting record at this stage, what's the plan for tours etc?

Our dream is to get out there on the road and tour like crazy and live off of it. But we don't have a booking agency yet, so let's see what the future has in store for us.

Matt - Is The Graviators your only project or do you guys have other bands?

Niklas and Martin has a band called Nymf, and they're releasing their debut on Tranubstans in September. Henrik has a psychobilly band called Mondo Trasho and is also about to launch a country music band. He's a good ol' country boy!

Matt - Is music your lives or you guys work? If so what youguys do for work?

We can't make a living off of our music. Niklas is a nurse assistant. Martin works as a caretaker at a home for people with all types of psychological disorders. Johan is a kindergarten teacher and Henrik works as a machine operator in stainless steel.

Matt- How do you see the current music scene? Do you guys catch many new bands coming up the ranks?

We try to, but we're mostly into the old stuff. 60's and 70's music. When music meant something. It's a lifestyle for us.

Matt - Who would you recommend checking out that you have heard lately?

We're four individuals that listen to different music but as a collective we can recommend our Swedish friends Graveyard. They sound vintage, they look vintage. Their music is real and pure, and will probably blow your mind.

Matt - What's playing in The Graviators stereo at the moment?

Matt - What can people expect when they catch Graviators Live?

They can expect to be run over by a runaway freight train! It's always a joy for us to be on stage and that's something that we want to share with our audience. We will take you on a journey, and it will leave you happy, and you can't wait to get on it again. You are the deer, we are the headlights!

The best gig we ever did was at the party celebrating the release of our record. Our label was there, they loved it, and it was just beautiful! We had great sound and we were very well rehearsed. Everybody had a great time!

Matt - What was the worst?

Our worst was probably at a local festival. We showed up right two minutes before ShowTime, some of us nursing a hangover from hell. Martin busted a string in the middle of a song so everything came to an awkward halt, and we got cut short. "Sorry guys, you're out of time". No shit. Another time, we played a gig, and there were 7 people in the audience. Or the drummer busts the kick drum head. But we've had more successful gigs than disastrous, that's for sure! Sometimes circumstances or twist of luck gets the better of you.

Matt - Given chance to jam with anyone dead or alive to form a supergroup who would that consist of?

We'll jam with anyone, dead or alive, as long as it brings us joy, experience and/or beer! Henrik: Actually, the biggest reason I joined the Graviators was that I have always wanted to jam with Martin. He's as good as they come and I had already been in a band with Johan seven years earlier, so I'm already in my supergroup!

Matt - What's the plan for the future?

The plan is to grow as musicians, write better and better music, and above all: Get out there and play for all of you lovers of real music!

Matt - Any Last words before I wrap this up?

Yeah, be on the lookout for a sophomore effort from us later this year. We'll keep you posted on our MySpace page!

Matt - Thanks so much for your time, your new record slays and wish you all the best for it in the future...

It's been a pleasure. Thank you Matt! All the best.